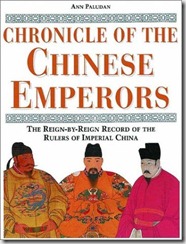 To get try and some background on wuxia films and their I recently read The Chronicles of the Chinese Emperors by Ann Paludan. The book gives an overview of the reign of approximately every emperor in Chinese history that is considered to be “officially” an emperor. Officially is in air-quotes because the book appears to defer heavily to the official Imperial histories. END_OF_DOCUMENT_TOKEN_TO_BE_REPLACED