This week I have a review of the first Myron Bolitar mystery novel – “Deal Breaker“. END_OF_DOCUMENT_TOKEN_TO_BE_REPLACED

It’s Saturday, so it’s time for another video. This time I’ve got another video game review for one of what is widely regarded as the best series on the Xbox 360. END_OF_DOCUMENT_TOKEN_TO_BE_REPLACED

After a long break between video game reviews, I’m back with a review of Record of Agarest War for the Xbox 360 and PS3. I’m also using a new video editing program, Sony Vegas, for this video, so bear with me as I work on improving the sound and picture quality in future installments. Get Record of Agarest War from Amazon.com END_OF_DOCUMENT_TOKEN_TO_BE_REPLACED

Well, this is my first go at the new video review format. Please feel free to give any constructive feedback in the comments. END_OF_DOCUMENT_TOKEN_TO_BE_REPLACED 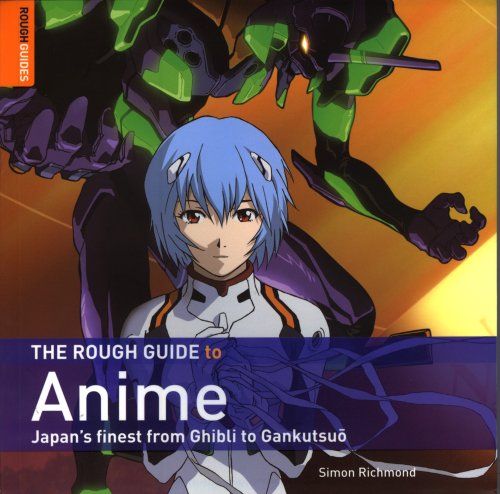 Finding a “canon” of important works in any field is generally difficult to settle on. Do you go by popularity, artistic merit, influence on other works, early works of prominent creators, or a combination thereof?

The Rough Guide to Anime, by Simon Richmond – in Penguin Books Rough Guides series, probably has the best “canon” list of anime titles available, and certainly makes for the best English language primer to anime currently in print in the US, and makes for interesting reading for long-time fans and newcomers alike. END_OF_DOCUMENT_TOKEN_TO_BE_REPLACED

So, on several occasions previously, my Dad had mentioned that Pat Boone had recorded an album of metal covers. Well, today I finally got around to hunting down the album in the library, and I gave it a listen. END_OF_DOCUMENT_TOKEN_TO_BE_REPLACED

I’ve been catching up on my Ultimate Spider-Man, for reasons various and sundry. The volumes that haven’t been reviewed at Bureau42, I’ve reviewed here. However, this storyline – the introduction of the Ultimate Universe’s version of the Sinister Six, has been reviewed there. Thus, I’m taking my review of this storyline to my blog here, so I can kind of review it in my own little way, with a bit of an aside about the state of your friendly neighborhood Spider-Man. This review contains some spoilers.

First off, I enjoy the Ultimate Spider-Man part of the Ultimate Universe, but it’s the only part of the Ultimate Universe that I like. Mark Millar’s work rubs me wrong in almost every respect. Ultimate X-Men turned me off the moment they decided that Ultimate Cable was future Wolverine (as if Wolverine wasn’t over-used enough). However, Ultimate Spider-Man has managed to balance Peter Parker’s angst with the more light-hearted face that Peter puts forward as Spider-Man in a way that the comics in the main Marvel U haven’t, for reasons that I can best tell are related to Editorial fiat. END_OF_DOCUMENT_TOKEN_TO_BE_REPLACED

Ever since the dawn of cinema, people have aspired to adapt the great myths and legends of history. The tales of the Arabian Nights, the legends of Heracles, and most significantly, the Illiad and the Odyssey of Homer. However, the technology required to tell the second to last has been a little lacking. However, the Lord of the Rings films, with the technological development of the Massive Engine, when was used to show the massive battles of the books, now the time has come where Homer’s works can be given the adaptation they so richly deserve, in a live action format.

This film is not that adaptation.

Now, don’t get me wrong, this movie isn’t bad. It’s just not the Iliad. The film attempts to hit the bullet points of the Trojan War – Paris flees Greece with the wife of King Menelaus of Sparta. King Menelaus is not pleased by this development (as you can imagine), so he contacts his brother Agamemnon asking him for help getting her back. He in turn contacts all of the kings of the various city-states he’s turned into vassal-states and tells them that it’s time for them to fulfill their end of the deal and bring along troops to go with him to Troy, and get his brother’s girl back (and also to get control of Troy). END_OF_DOCUMENT_TOKEN_TO_BE_REPLACED

If you’ve been following my reviews on Bureau42, you may know that I enjoy superhero comics, particularly judging by my reviews of DC: The New Frontier and similar works, as well as allusions to superhero comics in other reviews I’ve written. So, I missed Justice League when it first aired on TV. I missed it when it came out on DVD. However, now it’s finally out on Blu-Ray, and I’ve finally seen it. I’m pleased by what I’ve seen. My mind was not blown, but I did enjoy what I saw.

The series does what some of the best Justice League comics runs have done, such as Grant Morrison’s, and kept the league to a tight lineup: Batman, Superman, Wonder Woman (II – Diana Prince), The Flash (technically The Flash II as we see Barry Allen’s origin story, but we’re not doing prior incarnations here), Green Lantern (IV – John Stewart), Hawkgirl (I – Shayera Hol) and the Martian Manhunter. END_OF_DOCUMENT_TOKEN_TO_BE_REPLACED

So, I’ve previously reviewed Need for Speed: ProStreet and Carbon. Both were pretty decent racing racing games, putting aside the very significant and major flaws I pointed out in my reviews of both games. Well, in my review of ProStreet, I said I’d give GRID a try. As you can tell from the title of the review, I haven’t. What I have tried is Criterion’s more arcade style, open world street racing game Burnout: Paradise. I’ve basically made it through career mode (I’ve gotten my Burnout License), so it’s time to give my thoughts on the game.

No particularly story in this game. You complete various racing events in the fictitious city of Paradise City. As you complete racing events, you upgrade your license. As you upgrade your license you unlock additional cars, as well as unlocking cars by taking them out (by which I mean force them into a wreck) while driving around the city. END_OF_DOCUMENT_TOKEN_TO_BE_REPLACED

This review is going to differ from my usual review format, mainly because in this case, the film I’m reviewing, which is a documentary about the Genocide in Darfur, asks a few questions, and I’m going to try to give some opinion based answers.

Brian Steidle was a captain in the US Marine Corps who, after his term of service was up, left the Corps and became an unarmed monitor for the African Union, tasked with monitoring the cease-fire between the Sudanese government and rebel groups. There he observed the Darfur genocide, documenting it with thousands of pictures and hundreds of reports sent to the AUC commanders, which were ultimately classified and ignored. END_OF_DOCUMENT_TOKEN_TO_BE_REPLACED

I’m back from my little vacation from blogging, and I’m returning with a review of another documentary – and not one from Frontline or another episode of a PBS program (not that there’s anything wrong with that). With historical documentaries these days, film-makers tend to go either the History Channel route (scenes with reenactors inter-cut with talking heads), or the Ken Burns route (narration and readings of writings from the time with possible scenes of reenactors).  This film takes the Ken Burns route, but with different subject matter than the type of material Burns covers.

The documentary covers 1 year in Jackson County, Wisconsin in the 1890s. During which much of the county, particularly the area around the town of Black River Falls, goes more than a little bit mad. The documentary is told through articles in alocal paper in the county, read by Ian Holm. END_OF_DOCUMENT_TOKEN_TO_BE_REPLACED

Joe Kidd (Clint Eastwood) is a bounty hunter who has given up his old profession and instead has taken up raising horses. However, he ends up finding himself caught in the middle of a struggle between some Mexican revolutionaries and a cattle baron by the name of Frank Harlon (played by Robert Duvall), who is out to claim their land. Kidd must decide whether to side with Harlon and get paid, and get revenge for attacks on his own land, or to help the revolutionaries. END_OF_DOCUMENT_TOKEN_TO_BE_REPLACED

This week I’ve got another western movie review for you. The last review in this genre was a somewhat older film in the genre with Butch Cassidy and the Sundance Kid. This week I have a more recent film in the genre for you with the 2007 version of 3:10 to Yuma, starring Russell Crowe & Christian Bale.

Christian Bale plays Dan Evans, a rancher and Civil War veteran, who is barely scraping by – and it doesn’t help that Glen Hollander, who Evans owns money two, is actively sabotaging his efforts so he can claim Evans’ land. Evans finds a possible way to save his land, and his self respect, by escorting captured bandit Ben Wade (played by Russell Crowe), to the town of Contention where he will be put on a train to Yuma prison. However, Wade’s gang, lead by his psychopathic lieutenant Charlie Prince is out to rescue him. END_OF_DOCUMENT_TOKEN_TO_BE_REPLACED

My review this week is of another film that Bureau42 has already reviewed – the first Kaiju movie ever, Gojira. In case the fact that I’m using the Japanese title hasn’t clued you in, I’m reviewing the original Japanese version, instead of the US theatrical release that included new footage featuring Raymond Burr.

A nuclear test in the Pacific Ocean awakes a pre-historic creature which begins attacking shipping, before venturing onto land and attacking populated areas. END_OF_DOCUMENT_TOKEN_TO_BE_REPLACED

It’s been a while since my last book review on my blog, in part because it’s been a while since I finished reading a novel. But, finally (okay, after two weeks), I’ve finished the most recent James Bond novel, by Sebastian Faulks, which continues where Ian Fleming’s last Bond Novel left off. Is Faulks a worthy successor to Fleming (or at least the other non-Fleming writers to take on 007 – John Gardner and Raymond Benson)? If he isn’t, how good is the book?

It is the dawn of the “swinging ’70s”. James Bond has been on leave for 3 months since the events of The Man With the Golden Gun (the novel, not the film). However, he gets pulled off his leave early to investigate an heroin smuggling cartel which is suspected to be run by pharmaceutical mogul Julius Gorner, a man who has a unique deformity, one hand is large and furry like an ape’s – but it doesn’t have an functioning opposable thumb. He also has a passionate, fervent hatred of the UK, and only 007 stands in his way. END_OF_DOCUMENT_TOKEN_TO_BE_REPLACED