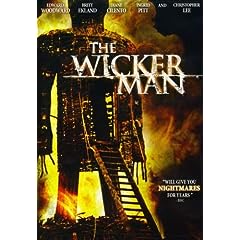 The Wicker Man is one of those movies I’ve heard many great things about, but have never gotten around to seeing, until now. So, now that I’ve seen it, I’m going to tell you what I think about it. Oh, and by the way, In cause you didn’t notice from the subject line, I’m referring to the original Wicker Man movie, starring Christopher Lee, not the remake starring Nicholas Cage.

The Plot: Scottish police officer Neil Howie comes to the island of Summerisle to investigate reports of a missing girl. However, upon arriving he learns that the girl isn’t missing… but no one’s actually willing to show him the girl to prove it. So he investigates, and in the process learn’s about the sort of Victorian-pagan revival thingie practiced by the inhabitants of the island. In the course of his investigations he learns of a dark and sinister core underneath the island’s quaint exterior.

The Good: The acting in this film is excellent, with all of the members of the cast doing a fantastic job. Christopher Lee’s performance in particular is fantastic, putting in a performance that I could best describe as being radically different from the performances he was famous for in the various Hammer Horror films in almost every respect. Where those roles were formal and stilted, these are casual and laid back (without necessarily being “hip”). Where those were silent and brutal, this role is eloquent and charming. The closest I could think of, in terms of Lee’s other performances, to compare this to is Lee’s portrayal of Scaramanga in The Man With The Golden Gun. Not all of the movie, just when Bond arrives on Scaramanga’s island and Scaramanga’s giving him a tour, and is being the perfect host. When so many of Lee’s roles can be described as (using a paraphrase of Lee’s own words) “Tall, dark, and spooky” this is an excellent change.

The Bad: I, personally, didn’t have any problems with the film’s pacing. That said, the movie is paced incredibly slowly. If you were to graph the tension, in terms of rising and falling tension, the tension basically increases at a very gradual level, slightly shallower than a wheelchair ramp, for about the first hour of the movie (the film is an hour and a half long), with it finally increasing rather steeply in the last third of the movie, when the pieces finally come togeather. I didn’t really have a problem with this, but, again, this kind of pasing isn’t for everyone.

The Ugly: The version of the movie I reviewed is the short version of the movie. There is apparently a longer version which is as close to the director’s definitive vision as can be found, since the original film stock has been lost, and could be sitting underneath a bypass in Britain slowly degrading due to moisture and heat. Unfortunately, this isn’t that version. Why does it matter? Well, Christopher Lee’s character doesn’t appear in the theatrical cut until about the halfway to 2/3rd point of the film, where as in the long cut he appears earlier, and there are more implications that he’s manipulating Sgt. Howie and what he sees and hears, thus making the reveal at the end of the movie seem like less of an arse pull, and instead making Lord Summerisle more of the chessmaster.

The Verdict: I would certainly call this film a classic film. I wouldn’t call it a classic “horror” film. I’d call it more of a suspense film. It’s not scary, I wasn’t terrified, and it didn’t play the same head games with me that John Carpenter’s At The Mouth of Madness did (which I’ll be reviewing at Bureau 42 on Halloween). I was horrified at Howie’s death (or at least I felt bad for him – it wasn’t a pleasant way to go), but if you’re going by that definition than there are probably a lot of other movies and series that could be described as horror. Anyway, if you have the patience for a slow paced movie, I’d recommend giving this a watch.