This time I’m continuing a look at Marvel’s first run at a Star Wars comic covering the span between Empire Strikes Back and Return of the Jedi.

With Claremont, Simonson, and Michelinie plotting the series, and with a series of plot threads laid coming out of Empire, the narrative here is much more cohesive, with three main thrusts.

The first is the flight of the Rebel Alliance and a search for a new base. This leads to the introduction of a race of aliens called the “Hoojib”, which are basically telepathic cabbits with something of a group consciousness. After some initial growing pains, the Hoojib and the Rebel Alliance come to an agreement to let the alliance use the Hoojib’s homeworld as a base, where they remain for the rest of this stint. The Fleet – and attempts to expand it by finding allies and to conceal it from the Empire, also plays a role (including one story where the Alliance tries to hide it in the corona of a sun, leading to R2 and Threepio having to save the fleet when a malfunction incapacitates the crew of the shieldships.

The second is Vader’s search for Luke. We hadn’t had the prequels at this point, so we didn’t have the added tension between the Emperor and Vader over the Emperor lying about the death of Vader’s child. For that matter, the Emperor is much less of a player here than probably any other depiction of this era of the Star Wars timeline post-Marvel.

The third is the Hunt for Han Solo. At various points Luke, Leia, Lando, Chewie, and the droids set out on one lead or another to find Boba Fett, who has yet to deliver Han Solo to Jabba the Hutt, in an attempt to intercept him before he delivers Han to Jabba’s much more protected palace. Fett himself, again, does not appear in this storyline. However, the Mandalorians do.

Wedge Antilles: Gets a whole issue following him and setting up what he’s been up to in between films – which is pretty filler, to be honest.

Luke Skywalker: Falls for a fellow pilot, Shira Brie, and is heartbroken after her death, and feels betrayed (and is more PO’d with Vader) after discovering her betrayal. At this point the line between the Dark and Light Sides of the force aren’t a thing yet – but there are a few occasions where it feels like Luke turns more on his anger when it comes to combat, particularly in the storyline on the world of Lahsbane.

Lando Calrissian: Probably gets the most character development of anyone in the series, particularly because the writers take steps to set him up in contrast with Han. If I were to describe them in a Leverage – Han is Grifter/Hitter, while Lando is a Grifter/Mastermind. While Lando isn’t any slouch in a fight, Han’s more inclined to go for his gun than Lando is, while Lando is more inclined to talk his way out of the fight.

As a side note with Lando, at one point he did business with a guy named “Dreeble”. Dreeble burned Lando, so since then Lando has used Dreeble as a “Chuck Finlay”-esque pseudonym when running a con, with the idea being that eventually a mark once they realized they’d been conned, would hunt down the real Dreeble and take them out, costing them the trouble.

Also, he has a Captain Harlock outfit. 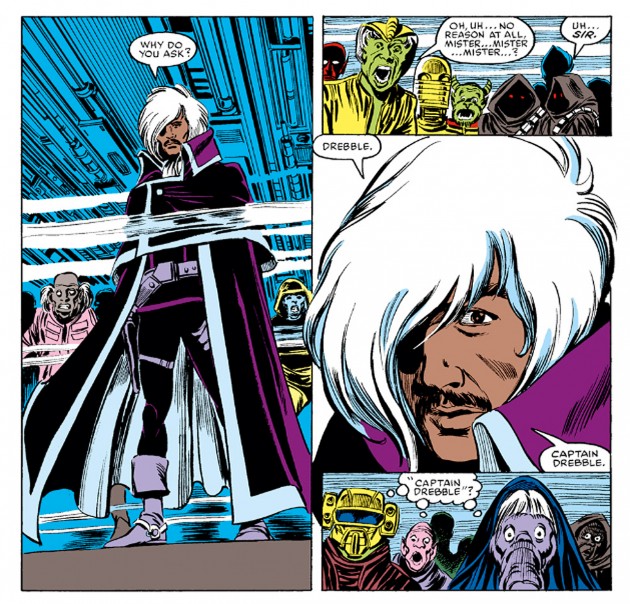 Chewbacca: Not much learned about his history, but we do learn that he’s beating himself up over having failed Han.

Let’s look at that writer list for the second – the definitive X-Men writer. The definitive Thor writer and artist. The author of Demon in a Bottle and The Armor Wars (as well as the creator of Jim Rhodes). The author of Fallen Angels and editor of Marvel’s published run of Akira.

On the art front, once again we have Simonson, Frenz (a definitive Spider-Man artist), and long time inker Tom Palmer’s few runs as a penciler.

This makes for a run that feels much less Silver Age than the New Hope-Empire era of Marvel Star Wars. Additionally, the book has little bits during Simonson and Clairmont’s runs that would foreshadow some of the traits of their runs on the X-Books. Not so much the Angry Claremontian Narrator (as Jay and Miles X-Plain the X-Men describe it), but more slightly detailed background characters who get some tongue-in-cheek depth right before their demise (in particular Stormtroopers and Imperial officers). I’m assuming that this element in particular influenced some of the bits with the Battle Droids in the Clone Wars animated series (“I was two weeks from Retiiiiirrreeemmmeeenntttt!!!!!”).

Probably my favorite stories from the run is the storyline with Shira Brie, and Annual #3 – The Apprentice. Unfortunately, not much more comes from that character, but I like to think that story being something of the setup for the recurring theme of the Sith Secret Apprentice that would come up after the introduction of the Rule Of Two.