The Fate universe has, in the works I’ve reviewed thus far, has generally formed a cohesive narrative whole – with the exception of clear comedic side-stories that are deliberately intended to be outside continuity like Carnival Phantasm. Others have adapted alternate routes of the visual novels that are part of Type-Moon’s Nasuverse (like Fate/Stay Night mostly adapting the Fate route and Unlimited Blade Works adapting that route). Fate/Prisma Illya is a true alternate take on the Fate Universe.

If I was to draw a comparison to another work of anime or manga, I’d compare this to the Shinji Ikari Raising Project manga. Like Shinji Ikari Raising Project, it’s set in an alternate universe where the parents (or foster parents in the case of Shirou) of the protagonist of the original work are still alive. The protagonist(s) have to contend with a challenge which is similar to but not exactly identical to the challenge of the original work, with a mostly similar cast and a similar themes, but with less severe stakes, and a less dire tone, and shifted to a different genre

There are a few differences here from that formula – Kiritsugu and Irisviel are still alive, but are generally absent, with Kiritsugu and Iris traveling on work, with instead the two Einzbern maids – Sella and Leysritt, acting en loco parentis while Kiritsugu and Iris are absent. Also, the series shifts the protagonist status to Illyasviel (Illya), which fits with the genre shift – to a Magical Girl show.

The show follows Illya and a new character, Miyu. They are each recruited into being Magical Girls by two sentient Magical Girl Wands – Ruby and Sapphire (respectively) – both with the voices and personalities of Kohaku and Hisui of Tsukihime (respectively). Ruby and Sapphire were originally assigned to Rin Tohsaka (from Fate) and Luviagelita (Luvia) Edelfelt (who first appeared in the epilogue of UBW), who were in turn sent from the Magic Academy in London to retrieve a selection of “Class Cards” which has made an appearance in Fuyuki City. However, as we saw in the epilogue of UBW, Rin and Luvia get along like the components of a binary explosive. So, once Ruby and Sapphire have enough of Rin and Luvia’s bickering – they quit and find new masters.

Rin and Luvia end up serving as mentors for Illya and Miyu (respectively), as they fight to acquire the class cards, which means in turn defeating dark versions of the various Heroic Spirits from Fate/Stay Night (except for Assassin – that version is True Assassin, instead of Koujiro). This gives series a structure like a more serious version of Cardcaptor Sakura, with Illya and Miyu having to take on the Servant of the Episode, with two servants already captured by the start of the series – Lancer and Archer.

Illya and Miyu have an interesting character dichotomy. Illya is a more conventional magical girl – not only in costume design, but in terms of worldview. She’s a fan of magical girl anime, and when Ruby tricks her into being a Magical Girl, she rolls with it pretty quickly, and completely gets the genre conventions. However, this means that when things get too dangerous and very serious, she falls into a real depression, due to the rather scary situation she finds herself in.

By comparison, Miyu falls into the archetype of the Dark Magical Girl. Like most versions of the archetype, the costume is more risque than the main magical girl. Miyu also has a more cynical outlook on life – and also a comedically serious worldview. Finally, she has a mysterious backstory that isn’t exactly explained in this season.

The show has a few significant minuses. For starters, this show has a little too much fanservice. Because the show is a magical girl show, instead of Illya being the age she is in Fate/Stay Night (16-18 – but with her growth magically stunted as a tactical decision for the next Grail War), she’s clearly middle-school aged. Putting aside where it puts things in terms of the timeline (Shirou, Rin, and Luvia are the same age they are in Fate/Stay Night), this brings up the issue of, well, middle school characters in skimpy outfits.

Specifically the “Install” costumes that Illya and Miyu have when they Install the various class cards are the worst offender of this. It’s like the various alternate “Equips” that Erza Scarlett has in Fairy Tail, except Erza is an adult, and these characters clearly aren’t. There’s some additional fanservice elsewhere that is unnecessary and off-putting, particularly in the episode where Illya learns Miyu is working as a maid for Luvia.

Additionally, to shove some additional moe tropes into the show, Illya is a bro-con. Illya having something of a twisted romantic attraction to Shirou worked in the main timeline, as while they are semi-related, they have also been raised completely apart. Here, they’ve been raised together, so there’s no excuse. Genshiken said it best about these sort of tropes: 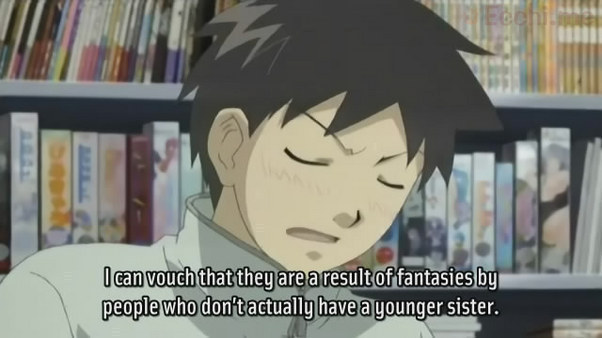 The pacing of the show is also rather rushed. Most TV anime, minimum, have a 12-episode cour. This show has a 10-episode cour. The series had already been approved for a second season by the end of the first season – but a little research has shown that season (and the two following seasons) have all run 10 episodes as well. Missing those two episodes actually hurts the pace of the series considerably. I can’t speak for how well the material in the show covers the same amount of the material in the manga, but from where I sit as a viewer, the show just felt rushed. That said, having three seasons coming after makes this more forgivable, as we can get more character development and world building in later episodes of the series.